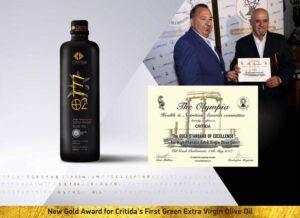 Critida SA once again won a gold prize for its early harvested extra virgin olive oil. The ceremony for the OLYMPIA HEALTH & NUTRITION awards was held on 11.05.2017 in the Old Parliament building in Athens.

For 4th consecutive generation Mr. Andreadakis Georgios, founder of Critida SA, continues to cultivate the family olive groves, located in the area of Messara, using traditional methods of production and harvesting and introducing various new methods of processing, bottling and preserving. He has managed to create a high phenolic early harvested olive oil, which based on special analyses made at the Kapodistrian University of Athens, have showed that Critida’s SA olive oil harvested at the beginning of the 2016-2017 olive oil period, in October 2016, has a total number of polyphenols 6 times higher than 250 mg / Kg determined by EU standards. The intense fruity aroma, the excellent flavor and its low acidity combined with the very high values of polyphenols, is a fact that allows it to be described as a “medicine”.

The early harvested extra virgin olive oil is packed in our new luxury ceramic bottle, which is resistant to changes in the temperature of the environment, thus preserving the excellent quality of olive oil for a longer period of time.

We invite you to a trip of distinct taste and discovery of the secrets of the CRITIDA’s SA olive oil and the Cretan diet.